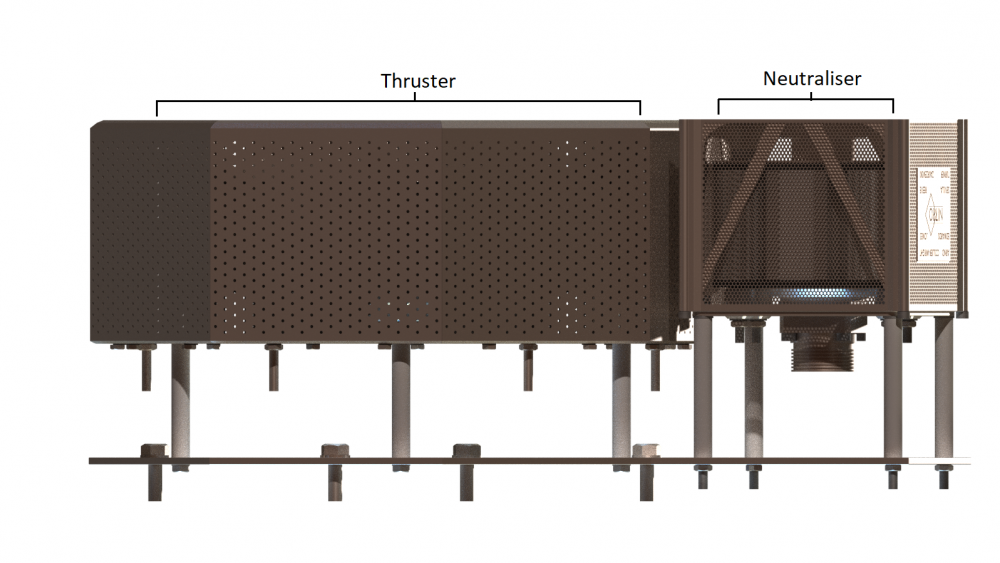 Face of the Future: Final Changes

Marcus and his group leant the importance of communication, and make minor changes to perfect the design of their neutraliser.

The last week of work before Christmas was somewhat of a transitional week for us. We ended up working a lot on tasks which did not directly contribute to the progression of the project. We spent most of Tuesday creating drawings for all of our components, in preparation for the critical design review (CDR) of the thruster. Although this design review was not for our part of the project, it was still an important milestone as it gave an indication of the progression of the development of the thruster. Fortunately, the CDR went very well, and we are hoping we might be able to test the thruster and the neutraliser together this year!

There was some confusion later in the week following a long email from our supervisor explaining numerous problems with our design. We spent a long time trying to come up with new approaches to these issues. However, in our meeting on Friday many of the existing designs were, in fact, confirmed to be acceptable. Such an experience is actually quite commonplace in engineering, and serves to underline the importance of accurate and regular communication between engineers.

Despite these issues, we have done some productive work on the project. Having made all the parts drawings the manufacturing process should now be a lot quicker. Additionally, we were able to find a provider for the iron heat treatment process, as well a supplier for the ceramic shielding. Furthermore, we were able to produce some lovely looking renders of the neutraliser, including some shots of it attached to the thruster in the test setup: 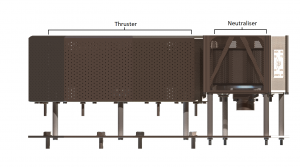 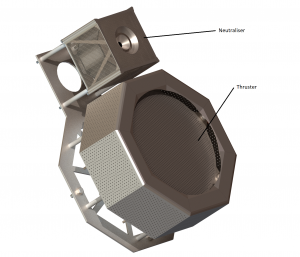 We have also made some last minute internal parts of our neutraliser, mainly concerning the antenna shielding design and the way we will make the iron yoke. As part of the assembly procedure of the neutraliser, the antenna needs to be soldered to the coaxial port, so that it can form an electrical connection to the microwave power source. This is made more difficult as the antenna must pass through the iron yoke. To solve this problem, we have devised a 2-part yoke, which allows us to solder the antenna first, before assembling the yoke around it. In the picture below you can see the yoke is now split down the middle 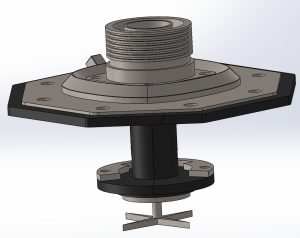 We’ve also made a change to the propellant reservoir. Originally, we planned to braize it to the back of the yoke. Braizing is a technique similar to welding, but does not guarantee an airtight seal between the reservoir and the yoke, which is desirable for our application. Instead, we will print it along with a steel plate as a single component, and then screw the inlet nozzles directly into this plate, to ensure an airtight connection. This plate doubles as a securing structure to hold the two halves of the yoke together.

The shielding design has also changed fairly significantly. The grooves of one part have now been designed into the iron yoke in order to remove the need for a separate ceramic base part. The other part of the ceramic shield has been replaced by a printed steel design, which will then be coated in ceramic. This will be cheaper and easier to manufacture, as well as more structurally sound, while still maintaining insulating properties due to the ceramic coating. 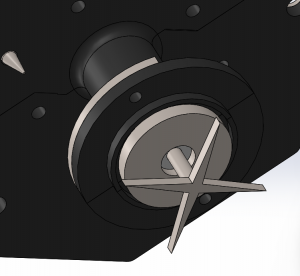 Having made all these design changes, we’ve now submitted everything to be manufactured! Hopefully we will have some parts made early next year and can then begin assembly and testing. Exciting!

Looking for your next engineering role?

Give Capital international a call on